Short Answer: Yes, only and only if it’s digitally-signed by Microsoft Corporation.

These are the more detailed steps on how I reached this conclusion:
In Visual Studio 2012, there’s VS 2012 ARMS Cross Tools Command Prompt.

and let’s see the result:

and the result in Surface (Windows) RT:

So how did apps like Office 2013 and other .NET apps run on the Surface RT?

and this mtta.exe runs on Surface (Windows) RT. See image below: 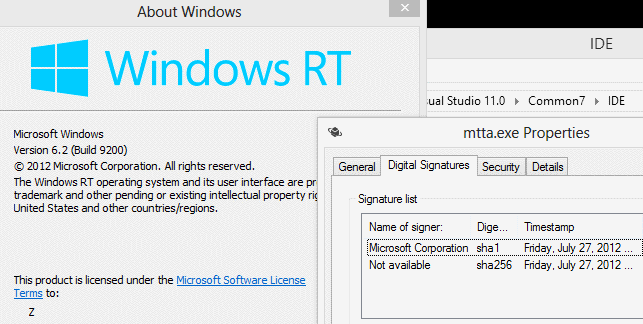 This means only applications signed by Microsoft can run in Desktop mode of Surface (Windows) RT!

Why???? Because by doing this, no virus or malware can ever run on the Surface (Windows) RT.

Genius, isn’t it? 🙂 Imagine a tablet ecosystem that is not plagued by the virus and malware problem….