If you’re hoping for a MacBook Pro Retina review, this is not it. I didn’t get it yet by the way, it is all part of Tim Cook’s operational genius, where he ships directly from manufacturing in China, on-demand utilizing the cheaper costs of transportation nowadays. In economy, inventory days is: goods remain in inventory before being sold. If you’re above the norm, something wrong with your sales forecasts (not generating enough demand), and if you’re below the norm, you’re losing potential customers. Apple breaks the norm by saying, “We never lose potential customers. They will come back and queue again tomorrow.” And Tim Cook’s right. We will queue again tomorrow 🙂

This is my first experience of queueing in front of the Apple Store in Ellis St, San Francisco, California. And the story goes:

Usually after morning prayers, I would relax and reply emails. Well today for some reason I felt like walking outside. And since it’s 5.30am, oh well, might as well queue in front of the Apple Store in Ellis St when I arrive on that area.

Surprise, surprise…at 5.45am I was Retina Queue #1 in front of the entrance. But I certainly was not the first in the store area. Inside the glass-walled store, you see employees already there. Cleaners making sure the store’s looking polished, security making sure each device is secured on the table, and Apple Store salesmen tidying up the shelves and checking each application on the demo device are working. They must love their jobs to wake up early in the morning to do these stuff 🙂 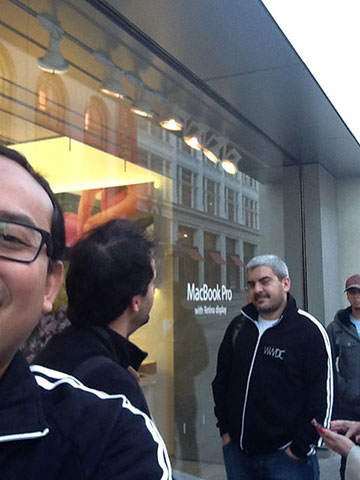 Soon after, Lobo joined in, he was Retina Q #2, and was a musician and developer from Los Angeles. He was updating me that he was also queueing on Wednesday and Thursday, but no dice. He said that the Retina came on Wednesday, but there was only 5 of them so it pretty much sold out in 5 minutes. Tim Cook, how could you only ship 5 Retina MacBook Pro’s to the nearest Apple Store next to Moscone West, where WWDC 2012 takes place? Surely you underestimate the buying power of 5,000 Apple fanboys?

Of course not. I was a technology evangelist before, so I knew what the power of marketing, especially viral marketing, could do.

If any other company, especially Microsoft, knows the secret sauce Tim Cook has and the evangelism spirit of Apple fanboys, they will have customers handing them money, instead of companies asking for customer’s money.

Back to the story…after a while, Dee joined. She was an American but stayed in New Zealand for some time, so she knows where Indonesia is, yippie 🙂  Her stories entertained us for like 30 minutes, and it was intriguing:

She started off by saying that she’s queueing for the Retina because of her husband. At first, I was like, “What? What kind of husband lets his wife queues for 2 hours just to get a laptop?” Then she elaborated, “Well, my husband is very generous to charities. He gives A LOT back to the world, hands out money in every continent. I admire him for what he does, and it’s going to be Father’s Day this Sunday June 17, so I thought the least I could do is help him get the Retina MBP he’s been talking about.” And at that point, Lobo high-fived her. Right on girl, you must love your husband a lot. So for all the wives out there, take Dee as an example 🙂

Now the next thing she shares is a bit disturbing…she said that the world is really a messed up place. Being in charity work, she saw that it was “culturally normal” for teachers to beat up students to death in certain parts of the world (I won’t mention which parts, you gotta buy me coffee to extract this information from me). At which point, Lobo, being American, right away said, “We should send our marines in there.”

We listened to her charity work stories… and was awed by the good work she’s doing. Here we are, me and Lobo, a consultant and a musician/dev, what have we done to help make the world a better place?

Dee then told us that she has 3 children, at which point Lobo asked, “Tell me your secret pills, how can you manage those 3?” The reply was unexpected, “Well, we’re planning to have a fourth one soon…” When we asked why, this is her reply:

I want to have more kids because I know my kids will try to and help make this world a better place.

Drum roll… at this point in time, 2012, where the younger generation delay getting married, and the young married couple delay having kids (or prefer not to have kids at all), this 30-something-year-old lady is a rare piece of gem.